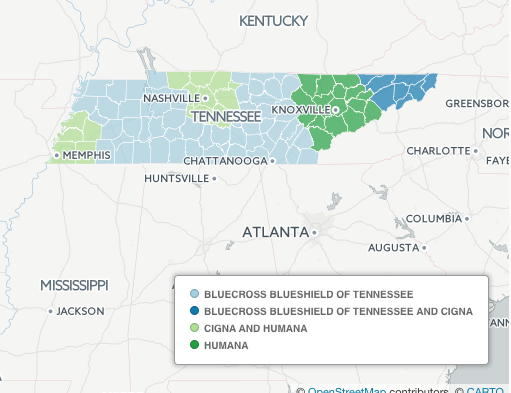 November 1st marks the beginning of Health Insurance Open Enrollment for anyone not on employer coverage or Medicare. This is the time of the year where you can drop, add or switch your health coverage for the next year with the new coverage effective January 1st, 2017. Here are a few changes we have seen for 2017.

Blue Cross Blue Shield has reduced their coverage area in Tennessee as well as their plan offerings. As the largest insurer of Affordable Care Act Plans (ACA) or “ObamaCare” plans, Blue Cross has seen record losses due to first year claims, as well as slow reimbursements from the government on subsidized premiums. This has caused three major changes for 2017 to their plans:

Humana and Cigna Healthcare are the only other two carriers remaining in the Individual/Family market for 2017 and they are primarily staying in the Metro areas (see coverage map). In the Knoxville Region we have seen Humana have a strong network and good plan design options. Cigna however in the Upper East Tennessee area where they are the only option aside from Blue Cross, we’ve seen them struggle with networks and many doctor groups are still out of network.

United Health Care will no longer be offering plans for individuals and families “On or Off Marketplace” for 2017.

Due to these changes we have seen small employer groups (under 50 FTEs) revisit group insurance. We have found pricing to be very attractive, and unlike previous years employers are not required to have 50% of their employees participate in the plan, nor do they have to pay 50% of the premium. This has been a refreshing alternative to the past few year’s increases on individual plans, and limited plan options for 2017 on the Marketplace.

For questions about your 2017 plan options, or to shop rates please don’t hesitate to reach out to us. Healthcare is an ever changing landscape these days, and a big concern to our clients. We want you to be informed and prepared for 2017.

Group Benefits on the Rise