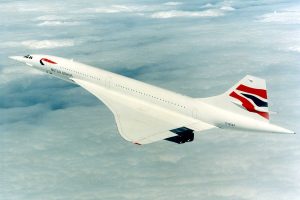 I never flew on a Concorde, the British-French supersonic passenger jet that was retired in 2003. The Concorde airliners were famous for their Mach 2.04 (1,354 mph) top speed that halved the time of a transatlantic flight compared to other passenger jets. They were also known for being expensive to travel on and expensive to operate.

Until reading a recent article by Mark Riepe of the Schwab Center for Financial Research, I never knew that the Concorde was also an expensive example of the sunk cost fallacy.

What is the sunk cost fallacy? A sunk cost is one that is already paid and cannot be recovered. The sunk cost fallacy refers to a tendency to make decisions based on what was already spent, even if a better decision about what is next could be had without regard to prior expenditures.

“A rational approach to sunk costs is to say that money you can’t get back should have no influence on decisions about what you do next. Only additional future costs should matter,” Riepe writes, “Yet sunk costs influence decisions all the time.”

Riepe continues, “The desire to avoid waste can sometimes be more powerful than our desire to enjoy ourselves… If you’ve ever sat through two encores by a band you don’t like just because you paid for the ticket, then you’ve already wrestled with this problem.”

The desire to avoid waste is noble. Having said that, sometimes we are better off making decisions about what is likely to bring us more enjoyment, utility, or profit by looking ahead – not backwards. It is important to learn when to not “throw good money after bad.”

I learned in Riepe’s article that the sunk cost fallacy is sometimes referred to as the “Concorde fallacy.” The British and French governments continued to spend money on the Concorde long after they knew the economic rationale for it was dead. The money they had already sunk in the project became its own reason to keep spending more.

How do we avoid similar behavior? We should remain aware of our bias towards making decisions using past expenses as the main consideration. With regards to investing and financial planning, we should learn to judge our investments according to future prospects over past feelings and to be flexible with our financial plans as our needs, attitudes, and lifestyles change.

Our team is here to help you discuss your portfolio and financial plan with an eye towards what is next – even though a Concorde flight is not in sight.